The Magic of Country 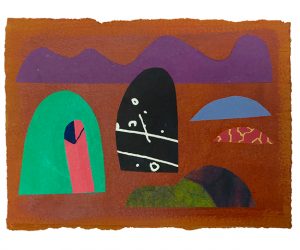 ‘The Magic of Country’ is an exhibition of painted and collage works by David Lancashire. It presents more than 50 works connected to a larger body of over 200 works started on a long ago trip to MacDonnell Ranges, Alice Springs. Here, David Lancashire, sat and painted in the 40 degree heat. He looked and listened; and began to feel something else. He started out painting ‘landscape’ but ended up painting ‘country’—the gaps, chasms and gorges.

Originally from the United Kingdom, David Lancashire began his study of fine art at the Circle Studio in Stockport at the age of eleven. He continued to study painting and ceramics at Stockport Art School and Liverpool Polytechnic. He began working in graphic design in the UK before immigrating to Australia in 1966 as a £10 pom, where he established his own design practice in 1976.

In Australia, David Lancashire Design was part of collaborative, cross-cultural teams tasked with sharing Aboriginal stories, culture and knowledge at various cultural and visitor centres around Australia. These include the Bowali Visitors Centre and Warradjan Cultural Centre in Kakadu National Park, the Karijini Visitors Centre in the Pilbara and the Bunjilaka Aboriginal Centre at the Melbourne Museum. These commissions completely redirected the trajectory of his working, creative and personal life.

In 1993, David experienced a juncture while working on the Bowali Visitor Centre in Kakadu National Park with architects Glenn Murcutt and Troppo. Of the experience, he said “working with Indigenous people gave me a precious insight into this country. It was life changing, and gave me a sense of place and an appreciation that helps me see Australia in ways that I don’t believe you can come to grips with in the city.” While on assignment here, David went bush many times with the late Gagudju elder, Bill Neidjie.  Here, he woke up under big skies with stars on both sides of the horizon. On one of these trips, the Elder told him that ‘he must listen to this country’. This opened David up to to a whole different way of seeing and working.

While working for over 40-years in cross-cultural contexts, David has seen the hard work that still needs to be done; but his works don’t get bogged down in this. Instead they are optimistic. They are hopeful. They are a celebration of the rugged beauty and fragility of the Australian landscape–a place he describes as one of the most beautiful on the planet. He hopes the works spark a curiosity in others. A curiosity to go, to see it, to smell it, to feel it. For all of us, ‘The Magic of Country’ is a reminder that nature requires our nurture; and that we all have a role to play in turning the tide whether that be through activism, expression, communication, acknowledgement or appreciation.

When: Opens Friday 2 February at 6PM. On exhibition until Sunday 11 March, Wed to Sun 10AM to 3PM.
Where: Nishi Gallery
Cost: Free
NG